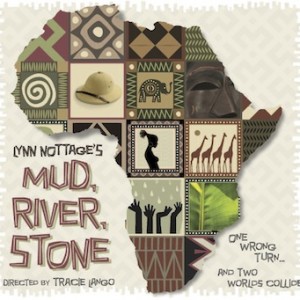 “Every now and then you get really lucky, and you see something that reminds you why you go to the theatre … I urge you to see this show.” (Michael Schwartz, STAGE Magazine)

Stranded in a seedy hotel somewhere in the interior of Africa, a vacationing African-American couple experiences an unforeseen turn of events. A romanticized journey to their roots detours into a bizarre adventure. An insightful and witty story reflecting on the inescapable connection between the personal and the political.
The action of the play unfolds somewhere in Africa, as two vacationing African-American Manhattanites, Sarah and David Bradley, take a turn off the paved road and end up stranded during a rainstorm in a seedy Colonial-era hotel in the middle of nowhere, together with an assorted lot of both black and white strandees. Suddenly what started out as a romanticized journey to their roots takes a detour into a bizarre and harrowing adventure. In this incisive and gripping thriller, by turns scary and sardonically funny, their experience takes on more and more absurd dimensions, forcing them to reflect on the eye-opening realities of contemporary Africa.
Award-winning author Lynn Nottage (b. 1964) has several notable plays among her published work, of which her best known, Intimate Apparel, was produced at The Stagecrafters in 2008. She received the signal honor of the MacArthur Genius Grant in 2007, the Pulitzer Prize for her latest play, Ruined, in 2009, and just this past September, the prestigious Steinberg award for excellence in playwriting. Presented by Playwrights Horizons in New York City, Mud, River, Stone premiered in 1997 to very favorable notices, for example: “… Nottage pulls off a deft bait-and-switch with her new play, [seducing] us into believing we’re settling into a sardonically funny vacation-from-hell travelogue, then bringing in elements that are … deeply thought-provoking.” (New York Newsday).