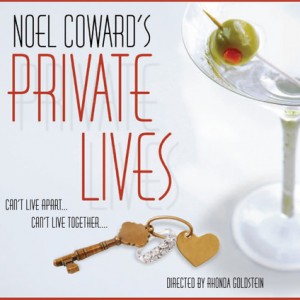 In this satirical and slickly sophisticated comedic classic, the antics and indiscretions of Elyot and Amanda Chase, formerly married to each other, both now newly-wed (to others!), transport us to the fashionable world of the rich and idle during the late 1920s.; Tempers flare, sparks erupt, heads are lost, barbs and arrows fly, hearts are set adrift … onetime spouses spinning in a whirlwind of love and hate. In this delicious take on marital passions … battle lines are drawn, and combat, both verbal and physical, turns to wicked farce. An enduring favorite from the acknowledged master of the quip, Private Lives gives fresh meaning to ‘over-the-top’.
Noël Coward (1899-1973) rose from modest circumstances to become one of England’s foremost playwrights, renowned for his wit, flamboyance, and a consummate sense of personal style. He published more than fifty plays, many of which are seen regularly in the theatrical repertoire, and also composed hundreds of songs and well over a dozen musical theatre works. The first Broadway production of Private Lives, in which Coward himself co-starred along with musical theatre legend Gertrude Lawrence, ran for 236 performances in 1931. Over the years that play has enjoyed no less than six New York productions, the most recent of which in 2002 was awarded the Tony for Best Revival of a Play. A symposium held in 1999 to mark the centenary of his birth listed no less than a dozen of his plays scheduled for production that year in Britain and North America. In one tribute, Tim Rice said of Coward: “[His] wit and wisdom will be as lively and contemporary in 100 years’ time as they are today”.