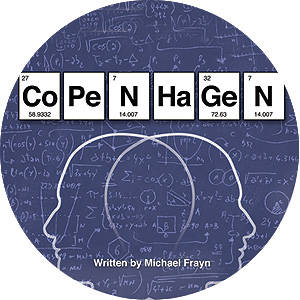 Two renowned scientists, Niels Bohr (Danish), his wife Margrethe, and Werner Heisenberg (German), once collaborators and friends, meet in 1941, when the world is at war. The play gives us an imagined picture of this encounter, treating us to a fascinating discourse on human relationships, memories, personal convictions, and on the fate of the world in the atomic age. Winner of Tony Award for Best Play (2000) “…Who would have thought [that] three…long-winded people [going on] about atomic physics would be such electrifying [company?]…The result is the most invigorating and ingenious play of ideas in many a year…” Ben Brantley, The New York Times Talk Back with the Director and Cast on Friday,June 14 Read the review of Stagecrafters production. Run time: 2 hrs 40 mins including a 15 minute intermission